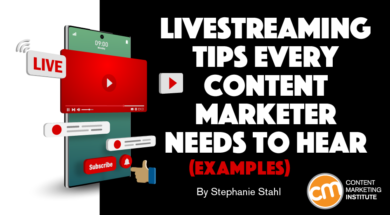 How many times a day does your phone ding to notify you someone is “live?” As I sat down to write this article, I found myself struggling to resist the siren of six livestream notifications.

Livestreaming isn’t a new technique, but it’s experiencing a surge in popularity.

“Livestreaming video has become a standard way to share ideas, information, and expertise,” says A. Lee Judge, CMO and co-founder of Content Monsta, which helps brands with video and audio content development.

Number of #B2C marketers using #livestream almost tripled between 2019 and 2020, according to @CMIContent #research via @EditorStahl. Click To Tweet

What’s behind the surge?

It’s easy to understand why the streaming of live video is now like a flood. Livestreams are relatively inexpensive and easy to produce. The tap of a button on a mobile device is all it takes to go live on multiple platforms at once.

Among its biggest benefits are the human connections enabled, requiring relatively few new skills required. As we all participated in or led more video calls during the pandemic, our comfort level in front of a camera has risen.

“CMI team members who never would have a year ago have been jumping into live video,” says Monina Wagner, CMI’s social media and community manager. “People have become so accustomed to being on video calls that taking it one step further isn’t so scary.”

Forced to do more video calls in the pandemic has made #livestreaming less scary for the previously hesitant, says @MoninaW via @CMIContent. Click To Tweet

HANDPICKED RELATED CONTENT: Video-Phobic Marketers: It’s Time to Get Over Your Fear of Producing Video

Before the COVID-19 pandemic drove many people to work from home, livestreaming often occurred as an add-on to in-person events. And it often came with a high production value.

A Louis Vuitton livestream presentation of a collection at the Louvre attracted thousands of viewers. A LinkedIn Live with Marketers talk show on the expo hall floor of Content Marketing World gave those who couldn’t enjoy the content in person a peek at what they were missing.

But during the pandemic, livestreaming became the source of personal connection and interaction with audiences – without all the high-production fuss.

The 9 Essential Types of Video Guide

To achieve your video marketing goals, you’ll need a variety of different video types. Find out what types of video your business needs, how to make them, where they fit in the funnel, and more. Get the guide.

The closest thing to IRL

Goldie Chan, founder and head of content and creative for Warm Robots, thrives on the real-time engagement livestream gives her show Building Your Brand.

“You’re able to respond to questions right away, especially when, say, somebody is telling a personal story, you get that response right away. It gets very visceral,” she told attendees of CMI’s Visual Storytelling Summit in December. 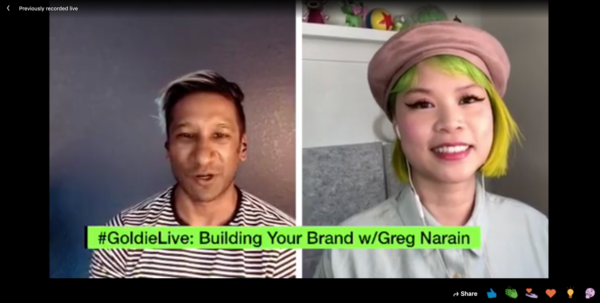 Goldie’s show is built around live interviews and discussions with guests. That’s a popular and successful format – but it’s far from the only one. Many growing and established brands are getting creative with the livestream format.

The Do It Now! Movement kicked off with a multi-hour event on Instagram Live to celebrate Juneteenth because, according to Founder Aleah Conlin, “It felt like people needed something closer to a live event.”

Educational sessions, entertainment, trivia, and more brought people together in meaningful ways. “The live connection was so important,” Aleah said.

Just a couple of months later, Do It Now! hosted a live event called AMPlifyCommUNITY to shed light on education inequality. You can watch the whole “multi-aged student empowerment event” – which featured Black and Brown artists, performers, activists, speakers, and musicians supported by White educators and others in the community – on Facebook or as separate videos from the event on YouTube. 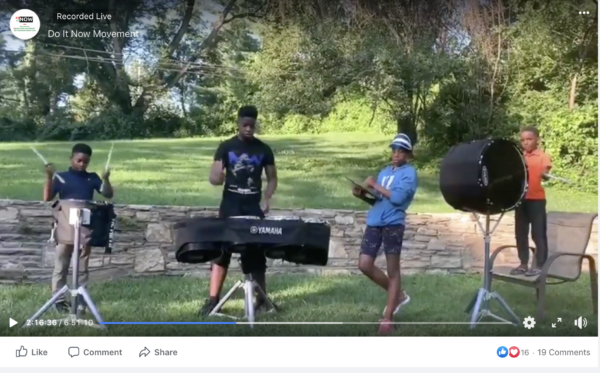 The organization hosts the Now Talk show on Instagram Live and other events on Facebook Live to help grow its audience.

Lexus recently tapped the power of livestreaming to invite the Twitch community to design a new vehicle to appeal to gamers. On a livestream hosted by popular Twitch streamer Fuslie, more than 550,000 viewers gave their opinions on features ranging from the car’s exterior wrap to a custom controller.

The downstream effect of all this creative livestreaming activity: The competition for attention is fierce. But marketers still can stand out in the stream with the right strategy.

Dorie’s professorial experience helped her set an effortlessly educational yet conversational tone for the interviews with business leaders on topics that help entrepreneurs and other professionals boost their skills.

But another skill helped propel her success – her ability to read the business tea leaves. “Video is incredibly popular on social media, so I knew it would be a great way to reach more viewers,” she said. “When LinkedIn Live launched, I realized it would be a priority for LinkedIn to see it succeed, and they’d likely give native video an algorithmic boost.”

PRO TIP: “To grow your following, promote your livestream on not just that social channel, but on any channel where you reach your followers,” Dorie says. She built the audience for her Newsweek livestream by mentioning upcoming interviews in her email newsletter and encouraging people to tune in.

To grow your following, promote your #livestream on not just that social channel, but on any channel where you reach your followers, says @dorieclark via @EditorStahl @CMIContent. Click To Tweet 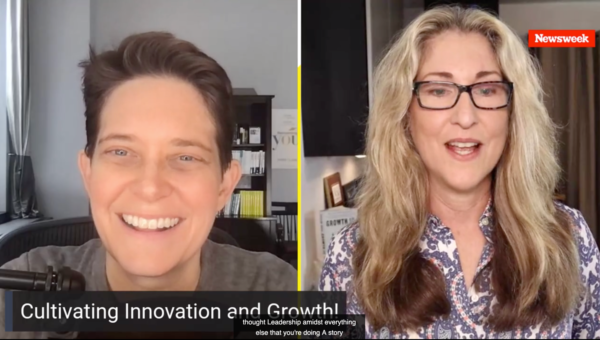 Dorie Clark, who hosts a LinkedIn Live show for Newsweek, recommends promoting your show not just on the platform where it airs but “on any channel where you reach your followers.”

HANDPICKED RELATED CONTENT: How to Get More From Your Livestream After the Broadcast

Let it flow on more than one platform

He believes livestreaming is “way more authentic” than scripted video and advises streamers to keep things candid and conversational. “If you’re going to read a script on the livestream, just email it to me,” he jokes.

Initially, Twitter performed best for Christoph, leading to hundreds (and sometimes thousands) of views per episode. But when he added Amazon Live to the mix he started routinely seeing 1,000 to 4,000 viewers per livestream episode.

PRO TIP: “Length matters. Shorter episodes don’t perform as well as longer ones because it takes people a bit of time to join in once a show goes live,” Christoph says.

Shorter episodes don’t perform as well as longer ones because it takes people a bit of time to join in once a show goes live, says @CTrappe via @EditorStahl @CMIContent. #livestream Click To Tweet

He advises livestreamers to wait to dish out the best content until more people have tuned in. “I’ve experimented with just letting the camera run for a bit and then going live 10 to 20 minutes in. That sounds kind of crazy, but it works on Amazon. Just put a graphic up with the time and be available to answer questions.” 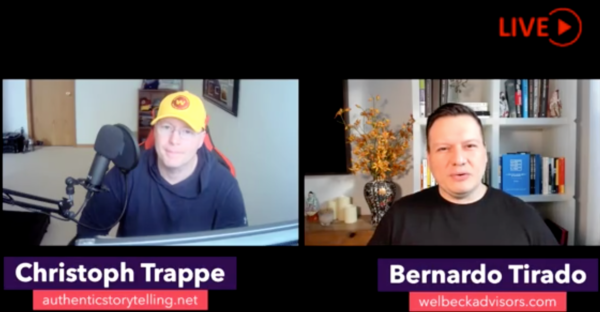 Christoph Trappe, who livestreams on Twitter and Amazon Live, says authenticity is key. “If you’re going to read a script on the livestream, just email it to me,” he jokes.

Do it, but don’t overdo it

Jason Schemmel, senior training and development specialist in social media at Amway, has spent the past few years building a personal audience on Twitch. His livestreams are sponsored by Founders Brewery. In exchange, he enjoys a brew each time he games live.

As a marketing professional, he sees the tremendous value livestreaming can bring to a brand – as long as brands focus on creating content that makes their community want to come back for more.

#Livestreaming has tremendous value as long as brands focus on creating #content that makes their community want to come back for more, says @JasonSchemmel via @EditorStahl @CMIContent. Click To Tweet

PRO TIP: “It gets easier and easier the more experience you get,” Jason says.

Jump on in – the water’s fine

Livestreaming doesn’t need to be painstakingly scripted or overly produced. But it does require great content. No matter the format, make sure to offer content that’s educational, entertaining, and, most importantly, worth your audience’s time.

Define your purpose. Pick a platform or two or three. And think about ways you can connect with your audience in real time and help them solve a problem or get inspired. They’ll appreciate the ability to look you in the eyes, chat with you digitally, and maybe even see your pets, children, or unfinished basement.

What are you waiting for?

CMI wades into the stream

Beyond the Chat: The #CMWorld Twitter Chat guest of the week tells CMI Social Media and Community Manager Monina Wagner things you can’t explain in 280 characters.

Ask the CMI Team: Every Monday, CMI team members talk about topics they’re asked about the most.