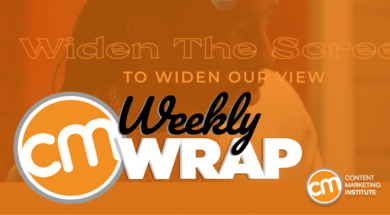 This week, it’s all about elevating conversations. Procter & Gamble, Volvo, and T-Mobile show how to make a brand platform matter by aiming for more than product promotion.

“Words alone won’t create change. Sustained action and investment are necessary to address the systemic bias and inequality in advertising and media.” Those words come from P&G, a brand that puts money (and actions) behind its statements.

Widen The Screen is an initiative to raise awareness for and fuel investment in Black-owned media. The first two-minute video challenges viewers to think about and recognize how stereotypes in media influence their perceptions.

P&G also released three behind-the-scenes episodes featuring perspectives from the people involved in creating the video. All are must-watch content.

Widen The Screen’s purpose reaches beyond this video series. “(It) is an expansive content creation, talent development, and partnership platform that celebrates creativity and enables Black creators to share the full richness of the Black experience,” according to P&G.

This summer, P&G will collaborate with Black-owned film production studio SpringHill Company on a project that takes viewers inside a boy’s imagination to showcase a range of professional opportunities beyond athletics.

P&G isn’t a newcomer when it comes to supporting Black creators. Now in its third year, Queen Collective is a partnership among P&G, Queen Latifah, Flavor Unit Entertainment, and Tribeca Studios. The mentoring and talent development program gives women filmmakers of color a platform to share important stories from their unique perspectives.

WHY IT MATTERS: P&G says it better than we could: “Only when we Widen The Screen to Widen Our View can we all broaden the spectrum of the images we see, the voices we hear, the stories we tell, and the people we understand. Fully.”

Showcasing a broad spectrum of stories (images, voices, and words) is a way to go beyond the surface and truly begin to understand someone else’s experiences.

P&G continues to use its huge platform to tell stories that matter. All brands – regardless of size – can tell and promote the stories of people who don’t have a platform to further their message.

Of course, the topic you choose should have some connection to your brand. There are lots of stories to tell – you shouldn’t have any trouble finding ones relevant to your brand’s purpose.

#WidenTheScreen #content initiative from @ProcterGamble shows brands how to do more than talk about diversity and inclusion to really make a difference via @Brandlovellc @ALeeJudge @CMIcontent. #WeeklyWrap #ContentMarketing Click To Tweet

Do you know (or do you remember) how controversial the seatbelt and seatbelt laws were? Do you know Volvo invented the three-point safety belt and shared the patented design with other car makers?

A new exhibit at Fotografiska New York uses portraits and audio to tell the stories of 15 people whose lives were saved by the seat belt Volvo invented.

The exhibit, a partnership between Volvo Cars and photographer Martin Schoeller, also tells a story about Volvo’s past while giving a glimpse of the company’s future. Volvo says it’s committed “to saving a million more lives with new safety innovations that could be just as controversial, including a speed cap on its new cars and exploring in-camera technology that can detect if a driver is distracted or intoxicated,” according to a MediaPost article about the exhibit.

If this theme sounds familiar, you might remember this moving video we featured last year.

WHY IT MATTERS: People might find it interesting to hear Volvo say, “We invented the three-point safety belt.” But that fact can’t compete with the impact of hearing the stories of how that invention saved lives – from people who wouldn’t be alive to tell the stories without it.

The combination of images and audio creates an emotional experience for the audience that will last long after they leave the museum (or finish watching the video).

It’s also a great way to educate people about the controversy of the past to mitigate future controversy.

[email protected] could’ve simply reminded people it invented the three-point safety belt. Instead, it created #content experiences from people telling the story of how seatbelts saved their lives, via @CMIContent. #WeeklyWrap #ContentMarketing Click To Tweet

T-Mobile celebrated April Fool’s Day like it was Thanksgiving.

The company flipped the script on what can be a tricky day for brands by turning it into a celebration of gratitude with the #GivesThanksNotPranks campaign.

This is not a prank.

For every tweet, we give $5 to a classroom in need. Tap the button to #GiveThanksNotPranks and we’ll donate up to $500k to @DonorsChoose through 4/1. Let’s go! 👇

The campaign offered people this prepopulated retweet: “I’m swapping pranks for thanks. All you gotta do is tweet #GiveThanksNotPranks. Each tweet = $5 to @DonorsChoose from @TMobile.”

But #GiveThanksNotPranks went beyond a charity-focused Twitter campaign. T-Mobile created the microsite www.givethanksnotpranks.com/ as a home base for the initiative. They shared information about the Donors Choose organization and ways to support the campaign (sharing, donating directly, or texting).

T-Mobile brought corporate partners, from Motorola, Twitter, and TikTok, to Mattress Firm, Wattpad, and SanMar into the campaign, which launched March 22 and generated media coverage. Other brands joined in during the tweet fest. T-Mobile followed up by announcing the results – over $1 million raised for classrooms in need through Donors Choose – on April 2.

You did it! Everyone who participated in #GiveThanksNotPranks helped us raise $1,050,000 for classrooms in need through @DonorsChoose.

WHY IT MATTERS: CMI recently advised brands to avoid April Fools’ Day content unless it fits with their established voice. In this case, T-Mobile did it right, says CMI’s Stephanie Stahl. The “Uncarrier” did the “un-April Fools’” thing by forgoing tomfoolery in favor of doing good.

The company also avoided the mistake of treating #GiveThanksNotPranks as a one-day opportunity. It smartly began the buzz more than a week ahead of the day. And it seems to have adjusted its Twitter strategy for the week because its activity soared. It went from posting every day or so to regular posts and replies every day through April 1.

Unlike most brands, T-Mobile followed up immediately to share the results (it’s the brand’s pinned tweet). Too often, whether it’s a fundraising story or one that promises more to come, brands fall down on the follow-up. Audiences are left wondering or, worse, feeling used. And that makes them less likely to consume that brand’s content or promotions in the future.

[email protected] flipped the script on April Fools with #GiveThanksNotPranks – see this and other examples of brands elevating their #ContentMarketing via @EditorStahl @CMIContent. #WeeklyWrap Click To Tweet

Intrigued, puzzled, or surprised by an example, news, or something else in content marketing? Share it with us by completing this form. Your submission may be featured in an upcoming Weekly Wrap.