3 Playful Content Marketing Examples Show Brands Getting Their Game On 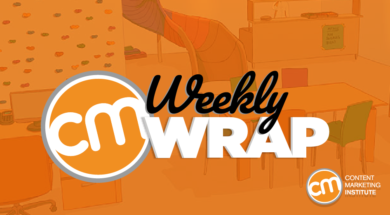 This week’s examples show how fun it can be to get others involved in your content creation and delivery. Whether it’s your at-home co-workers, your viewers, or your gameplaying customers, look outside your content team for inspiration, cooperation, and fan-friendly competition.

Get your kids to do the work

Children have been many of our co-workers for a year now. Why not enlist them to help with content creation?

The content team at digital agency Jellyfish Training asked their kids to create visions of what offices will look like in the future. They pulled the resulting hand-drawn designs into a blog post and sent a press release about the post to media outlets. 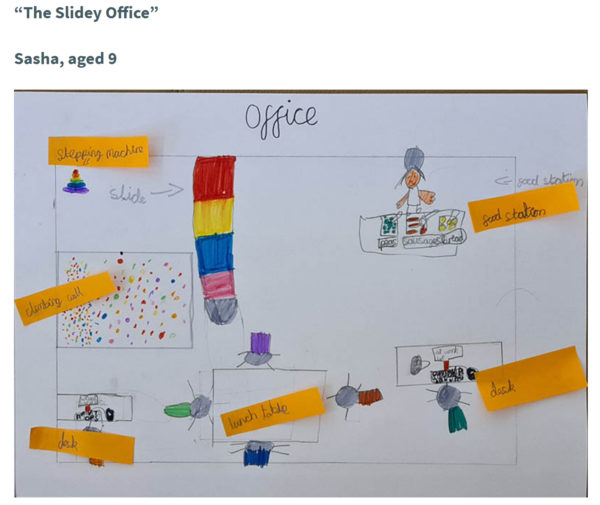 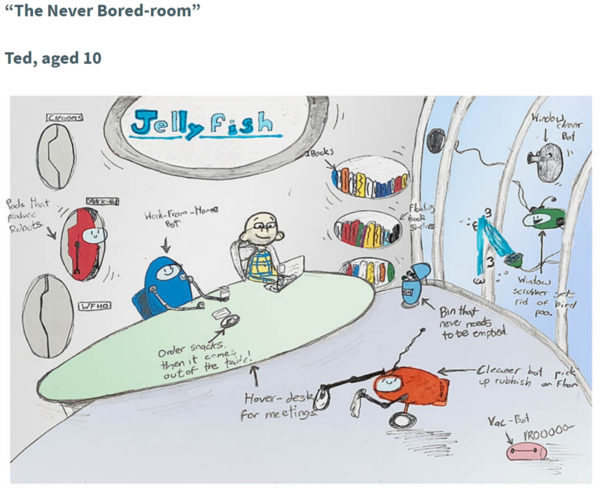 The post wasn’t all fun and games – Jellyfish also incorporated a realistic touch alongside the charming designs. Jellyfish Training’s vice president of real estate and facilities offered advice on how to improve work-from-home setups and adapt environments to make the transition of returning to office life easier.

WHY IT MATTERS: You’ve probably heard plenty of advice about how and why to include your brand’s employees in content marketing. Jellyfish turned that idea on its ear by tapping into the creativity of its employees’ children. Think about it: employees might share the company’s recent blog article on work-from-home tips. But they will proudly share what their kids created for your brand.

If your kids have been your co-workers for the past year, take a page from the @jellyfishglobal playbook – put their imaginations to work for your #ContentMarketing via @CMIContent #WeeklyWrap. #Examples Click To Tweet

We love that it’s a visually fun twist on employee-generated content. And, let’s be honest, we probably wouldn’t have written about (or even read) a press release with work from home tips. Been there, read that at this point. But the kids’ imagination put a fresh spin on the approach.

Still, Jellyfish could have gotten even more mileage out of the project with some cross-use between public relations and social media. A brief perusal of its Twitter, Facebook, and Instagram feeds revealed only one tweet about the project (a share by The Drum’s coverage). Each child’s image as a separate post would have made an appealing, shareable set of social media content.

HOW WE HEARD ABOUT IT: Jellyfish sent the press release to us.

There’s a ton of food-related content out there. So it’s somewhat surprising to see a brand stepping into that well-trod territory. The new entry comes from one of the world’s largest retailers and features plenty of celebrities, so it just might have a chance.

The Walmart Cookshop site features dozens of food show episodes. The all-star lineup includes Veggie Boost with Jamie Oliver, Over The Top with Patti Labelle, and Casa Vergara (starring Sofia and her son Manolo). Other shows are based on a premise,  like Create Your Own and Mystery Basket. 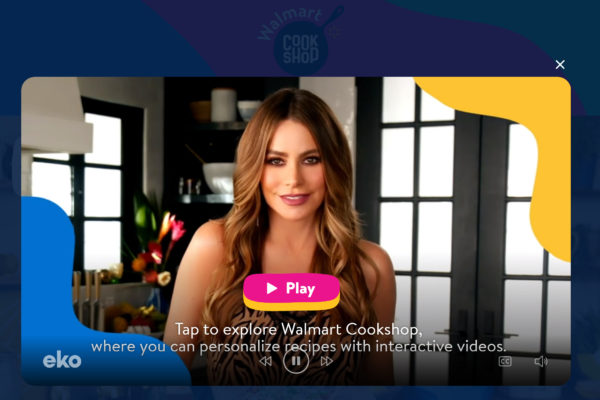 Even a big brand like Walmart needs something to make its content stand out in the smorgasbord of food content on the internet. What’s special about Walmart Cookshop videos? They’re interactive.

Take this one from Jamie Oliver. Viewers pick why they’re watching – to get their children interested in eating veggies or to take their side dishes to the next level. 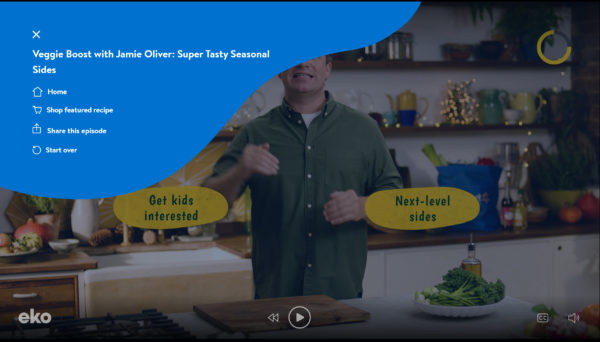 A click on dots in the upper left reveals a dropdown menu where viewers can shop the ingredients (a direct connector to sales) or share the episode (content promotion).

WHY IT MATTERS: Interactive content is a great way to determine – and deliver – what content the viewer wants. It lets Walmart incorporate personalization without having to invest much in customizing the content. The host records a brief intro that reveals the two options. Viewers see the choices on video overlays. (If a viewer doesn’t pick, the host “picks” for them.)

Interactive #videos are a simple way to determine – and deliver – the #content viewers want. See the latest examples from @Walmart Cookshop via @CMIContent #WeeklyWrap. #WalmartCookshop Click To Tweet

We think this is a great way to give viewers control over what they’re viewing. Instead of letting the platform algorithm “recommend” videos, viewers can make their own choices.

HOW WE HEARD ABOUT IT: CMI’s Kim Moutsos recently saw an article about Walmart Cookshop on Eat This.

March is the most famous month for brackets (hat tip to you, NCAA basketball tournament). Paruzal Games is getting in on the act to celebrate its first anniversary.

The Great Escape competition is designed to find the fastest escape room team on the internet. Teams pay a $200 registration fee to compete in the tournament, which involves four or more unreleased Paruzal games. All participants receive a goodie bag and a discount on Paruzal’s online escape room games.

The eight fastest teams enter the bracket rounds and compete until the fastest is crowned in April.

WHY IT MATTERS: Anniversary celebrations usually focus on the brand, not the customers and audience. And they usually involve a lot of boring backward-looking content. Paruzal Games avoided all of that. They’re engaging their audience with the promise of not-yet-released products and bragging rights.

Paruzal formatted its content to recognize the popularity of bracket tournaments this time of year. And it even turned the contest into a revenue stream, collecting $200 per team.

HOW WE HEARD ABOUT IT: Maracaibo Media Group sent CMI a news release.

Intrigued, puzzled, or surprised by an example, news, or something else in content marketing? Share it with us by completing this form. Your submission may be featured in an upcoming Weekly Wrap.