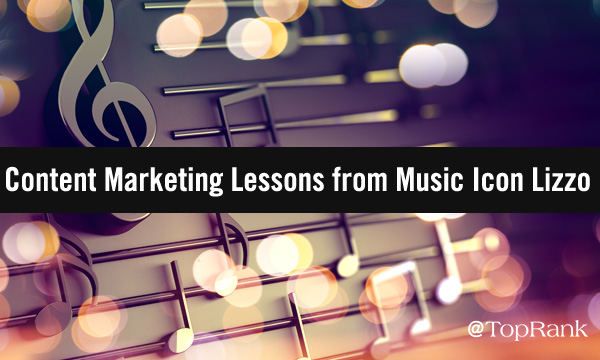 Here in Minnesota, home of TopRank Marketing and birthplace of yours truly, we tend to take great (excessive?) pride in famous figures who carry the “one of us” label. When you encounter a Minnesotan in the wild, you’re very likely to overhear some level of boasting about Prince, or Bob Dylan, or F. Scott Fitzgerald.

Why is this? Maybe it’s driven by an inferiority complex, stemming from our reputation as “flyover country.” Or maybe it’s just a natural extension of the “Minnesota nice” disposition. Whatever the case, we love to brag about our locally-sourced successes, and lately, that means showing lots of love for Lizzo.

Who is Lizzo? For those who’ve somehow failed to take notice, she’s one of the biggest things in music right now. The singer/rapper/songwriter has rapidly transformed into an industry icon after finding mainstream traction with her third studio album, Cuz I Love You. Last month, Lizzo’s hit song “Truth Hurts” reached No. 1 on the Billboard Hot 100, passing up some obscure singer named Taylor Swift.

Lizzo isn’t from Minnesota originally but moved here in 2011 and now calls the Twin Cities home. As a follower of the local hip-hop scene, and someone who had the opportunity to see her perform in front of tiny audiences at basement venues many years before her breakout, it’s been inspiring to see the uber-talented diva ascend to worldwide recognition.

And as a content marketer, I find her story inspiring for different but no less impactful reasons. Today, I thought I would share a few of them.

Beyond sheer talent, Lizzo’s rise has been driven by persistence, authenticity, and honesty. Marketers everywhere can take note.

Not Every Eventual Hit Is an Immediate Winner

I pulled the above phrase directly from my recent post discussing holistic content strategy, and the importance of ongoing promotion. When I originally wrote those words, Lizzo immediately came to my mind.

“Truth Hurts” recently set a Billboard record as the longest-standing solo female rap No. 1 song in history. By now you’ve almost certainly heard that infectious thumping piano melody on your radio, computer, or TV. But what you might not know about the song is that it was originally released back in 2017, to little fanfare.

“The day I released ‘Truth Hurts’ was probably one of the darkest days I’ve had ever in my career,” Lizzo told People in an interview this past summer. “I remember thinking, ‘If I quit music now, nobody would notice. This is my best song ever, and nobody cares.’ ”

If you’re a marketer, artist, or creator of any kind, you’ve surely had moments like this. You put your heart into something, you’re certain it’s going to be great… and then it falls flat. But as Lizzo’s story reminds us, a lackluster initial reception doesn’t mean you were wrong.

That’s why it is so vital to extend content promotion beyond the initial burst. Sometimes it just takes the right platform and timing to break through. One signal-boost in front of a new audience can make all the difference. In Lizzo’s case, a co-sign from and collaboration with the aforementioned legendary “one of us” Prince was instrumental (pun intended) in vaulting her to stardom.

When charting a new content initiative, it’s always smart to build in staggered promotion that crosses multiple channels, and is customized to the context of each. You never know when and where it’ll catch fire.

When charting a new content initiative, it’s always smart to build in staggered promotion that crosses multiple channels, and is customized to the context of each. @NickNelsonMN Click To Tweet

Be Genuine. Be Yourself.

Lizzo does not look, act, or make music like others at the pinnacle of her field. And that’s exactly why she’s there.

She conveys a resounding message of body positivity. She is unapologetic with her bluntness and snark (“It’s a me, myself kinda attitude,” she explains in the song “Soulmate”). And she doesn’t constrain herself to any category with her music. One minute she’s rapping forcefully, the next she’s crooning soulfully, and then all of a sudden she’s blowing your mind with a flute solo.

I’ve long preached the importance of authenticity in marketing. People want to do business with brands that are genuine and relatable, and not in a way that makes it seem like they’re trying too hard. Lizzo’s persona comes off as natural and effortless because it’s who she is. She isn’t pretending or conforming.

Oh, and she also takes emphatic stands. In addition to embracing her body and encouraging folks of all shapes and sizes to do the same, she’s a vocal advocate and ally in the LGBQT community.

To look at faces in the crowd at one of her performances is to understand how deeply connected Lizzo is with her fans. This rapport is built through shared values as much as the quality of her music.

What values does your company share with its audience? How can you broadcast them, authentically? Here lies the key to affinity and loyalty.

What values does your company share with its audience? How can you broadcast them, authentically? Here lies the key to affinity and loyalty. @NickNelsonMN Click To Tweet

What made “Truth Hurts” such a viral hit? Well, for one thing, it’s an incredibly catchy jam. But it’s also bitingly honest and candid – a breakup song featuring lines such as “Why men great ‘til they gotta be great?” and “You’re supposed to hold me down, but you’re holding me back.”

Lizzo has plenty of upbeat, positive songs, but she’s not afraid to touch on the real struggles, frustrations, and setbacks of life. She shares in the pain of her listeners. This empathy leads to resonance, and it’s a valuable example for marketers. No one wants to deal with a brand that’s constantly enveloped in negativity, but at the same time, how can I connect with one that’s nothing but sunshine and roses? How can I trust them to shoot straight with me?

Being honest with our marketing means being transparent with the good and the bad. Don’t run from your failures; learn from them, and improve. Don’t hide your flaws; fix them, and invite feedback. Don’t sweep bad reviews under the rug; respond to them, and try to make it right.

As our CEO Lee Odden put it in a recent interview featured on the LinkedIn Marketing Blog*,  “No one is fooled by brands only showing the positives. By being open and responsive, brands reveal they are relatable and worth trusting.”

No one is fooled by brands only showing the positives. By being open and responsive, brands reveal they are relatable and worth trusting. @leeodden Click To Tweet

It fills me with joy to see Lizzo conquering the world. Yes, it’s partially because I love seeing my home state get some shine, but even more so, it’s because she embodies many qualities that I believe are essential to creating awareness, engagement, and loyalty in today’s world – whether you’re a musician, influencer, entertainer, or content marketer.

In addition the above, Lizzo also delivers unforgettable, epic experiences while on-stage. (See: her VMA performance.) If you’re looking for more marketing inspiration on that front, check out our collection of expert tips on creating memorable content experiences.